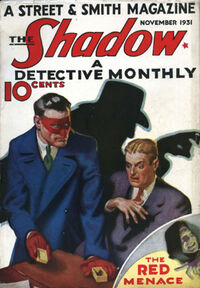 Bruce Duncan is the heir of a Russian fortune bestowed to him by the late Prince Samanov. Because of his inheritance, communist agents began targeting him in order to steal the Czarist wealth.

When a crimson-masked megalomaniac went after Prince Samanov's messenger, Berchik, Duncan became mixed-up in the kidnapping plot and actually aided The Shadow in defeating the powers of the "Red Envoy."[1]

In a much later case, Duncan worked as secretary for the inventor Baldridge Jark. Jark created an atomic disintegrator ray, and Duncan overheard how the invention was going to be used for crime. He quickly notified The Shadow's secret agent, Cliff Marsland about the situation. Unfortunately, Duncan was injured and taken out of action for this adventure, however, The Shadow did receive Duncan's warning and thwarted Professor Jark's crime wave.[2]