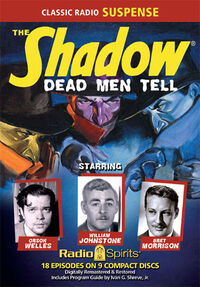 Bret Morrison is best known as the voice of The Shadow on the old-time-radio show from 1943-1944 and then again when he came back from the war from October 1945 until the show's finish on December 26, 1954. Of all the actors who portrayed the mysterious crime fighter, Morrison held the part the longest and is most identified with the character. At one point, Morrison even wrote two scripts for the show. He and Grace Matthews, as Margot Lane, recorded The Shadow's final episode for a special record released in 1968.

Prior to voicing the chilling crime fighter, Morrison was working on the radio comedy-drama series, "The First Nighter," most notably as Mr. First Nighter himself -- and he even sang occasionally. It was his duties as a singing host for "Theater of the Air" which won him a cold-reading audition as The Shadow. His debut on the show was "The Gibbering Things" by Alonzo Deen Cole.