The Shadow Wiki
Register
Don't have an account?
Sign In
Advertisement
in: Staff, Templated Articles, Male Staff Members,
and 7 more 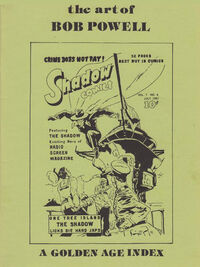 Bob Powell was a prolific comic book artist during the Golden Age era. He attended the Pratt Institute in New York City, and went to work for the Eisner-Iger studios in the late 1930s. While working there, he illustrated for several comic publishers. Powell would later work in Will Eisner's personal studio, helping him co-plot the first "Blackhawk" story in Quality's Military Comics, and illustrate the "Mr Mystic" back-up feature found in "The Spirit Section" of the Sunday paper.

After the war, Powell opened his own artwork shop, and with the help of several assistants, drew for several publishers, including Street & Smith's The Shadow Comics and The Shadow Magazine.