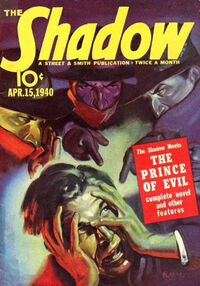 Benedict Stark was a genius of crime and one of the most evil master-criminals The Shadow had ever fought. Though he is also known as the Prince of Evil, he called himself Mr. Remorse.

During their first battle, he successfully kidnapped The Shadow's agent, Rutledge Mann. Even after Mann's rescue, Stark brazenly kidnapped him a second time along with four other agents who worked with The Shadow.

Besides the criminals behind the crime insurance racket,[1] Stark, and his henchman, were the only other adversaries to unmask the identity of The Shadow and fully disrupt the vigilante's secret organization.