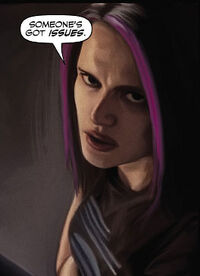 Batu Khan is the granddaughter of Shiwan Khan, an archenemy of The Shadow.

Kyle Vincent, who was Harry Vincent's grandson and also worked for The Shadow Network briefly in 2013, ultimately betrayed the pulp hero when he located Batu and tried to involve her in his evil plan to vanquish the crime fighter. A fellow Shadow agent, Margo Forysthe, later killed Kyle when he and Khan's henchmen invaded The Shadow's hideout.[1]

Resisting to be under her grandfather's watchful eye, Batu struck out on her own again and formed a dangerous partnership with a local gang leader who claimed to have the key to defeating The Shadow.