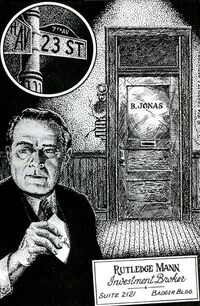 The B. Jonas Office is located in a rundown building on 23rd Street, east of Broadway in New York City.

During his early years of crime fighting, this was The Shadow's sanctum before he moved to another antiquated building lost in the heart of New York.

The empty office is now the main drop-box for reports from The Shadow's agents. These reports are collected by Burbank, The Shadow's contact man. Sometimes, The Shadow himself will pick up the secret envelopes.

His other agents, Claude Fellows, and later his successor Rutledge Mann, dropped off these reports in person.