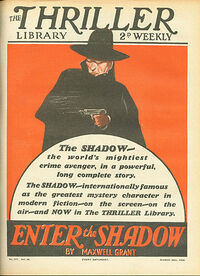 Arthur Jones was a "pulp" magazine artist who was associated with the UK crime-stories tabloid, The Thriller. He began working for Amalgamated Press in 1913 and several years later became the main artist for the publisher's "The Thriller" newspaper. He continued illustrating the newspaper's covers for over a decade, perhaps as late as May 1939. His first "Shadow" cover was The Thriller Library #477.