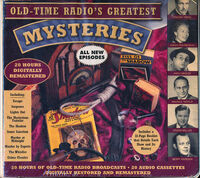 Arch Oboler was a legendary radio scriptwriter, playwright, screenwriter, novelist, producer and director who was active in radio, films, theater and television.

His radio scripts gained much attention due to their gruesome horror aspects.

He first gained fame with the midnight radio program Lights Out, when he was hired to write for the show in 1934. Under Obler's direction, the weekly program aired the most somber and horrific tales of brutal violence that the radio audience ever heard.

Obler also wrote a handful of scripts for first season of The Shadow Radio Show (1937-1954). These were well written, innovative, short stories which were filled with "horror" elements. Several of them were about mad doctors injecting serums or seeking limbs from unfortunate patients. All of them dealt with the mutilation of flesh.