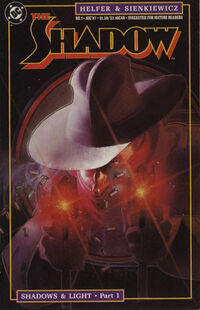 Andrew Helfer is a comic book writer and editor. He is best known for his satirical storytelling for DC Comics' ongoing Shadow series from 1987-1989. His first work on the Shadow was editing Howard Chaykin's ultra violent, limited-series a few months earlier.

After editing Chaykin's Shadow series, Helfner began writing The Shadow's ongoing series, with Bill Sienkiewicz on artist duties. Following Sienkiewicz's departure, Kyle Baker became the artist on the series. One year later, the series was abruptly canceled in mid-plot, allegedly due to objections by Condé Nast Publications, The Shadow's owner, who disliked the tone of the series once their character was killed and then later resurrected as a cyborg.